With 3 wins and 1 draw from their 4 matches the Year 5 Hockey team were crowned as champions of this year's competition.

Our team: Ava, Hannah, Grace, Olivia, Scarlet, Isabelle, Mollie and Kenzie, travelled to a very wet Sleaford to take part in the county finals with the winners of the other 7 district tournaments.
In our first game we beat Butterwick 1 0.
In game 2 we drew 0 0 with The Meadows. In our 3rd game we lost 1 0 to Spalding which meant we needed The Meadows to beat Butterwick if we were to make the semi final, which they did.
Group Standings
The Meadows 7
Richmond 4
Butterwick 3
Spalding 3
In the semi final we played the winners of group 2, Isaac Newton (Grantham). We took the lead in the first half. In the second half our opponents equalised to take the game into extra time. We retook the lead in the first period of extra time. This time we were able to hold on and won 2 1 to book our place in the final.
In the final St Botolph's scored an early goal to put us under pressure. They then defended extremely well. Late in the second half, the referee awarded a penalty against us which St Botolphs scored to give them a 2 0 win. 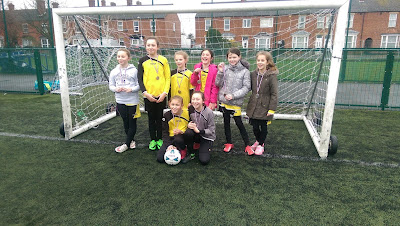