24 pupils from Years 5 and 6 went with Mr Mills, Mr Lill and Mr Grantham went to a very cold Skegness Grammar School on the 28th November to take part in a football competition. 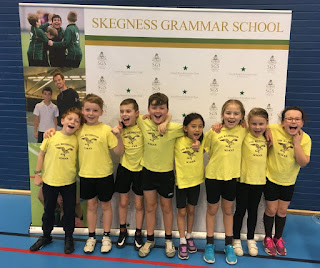 Last week was a busy one for some of  our Y3 and 4 children with appearances in both football and sports hall athletics. On Wednesday 22nd November the following children took part in an athletics event at Skegness Grammar School;
Harry, Noah, Samuel, Maddox, Nyah, Boe, Sophie C & Sophie A made up the winning team in the Sportshall Athletics competition.

On Thursday 23rd a Y3 team and a Y4 team took part in the indoor football at Skegness Grammar School.
The Y3 team of; Frankie, Cruz, Theo, Lewis, Jake and Jaydon battled hard and picked up lots of experience for future events.
The Y4 team of Harry, Maddox, Owen, Eden, Noah and Johnny drew their first game and then won all of their remaining games to take first place overall.

Email ThisBlogThis!Share to TwitterShare to FacebookShare to Pinterest
Labels: Fixtures 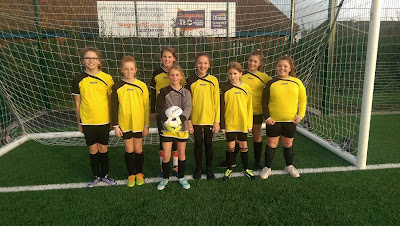 On Thursday 9th November, Lily-Mai, Macey-Jayne, Mayzi, Olivia D, Tegan, Amaleigh, Grace C from Y6 and Freya from Y5 went to Wainfleet Road Playing Fields to take part in the district round of the Danone Cup.
We played three matches. In our first game we defeated Friskney by 2 goals to 0. In our second game beat Willoughby by 3 goals to 0. In our final game we kept up our winning un by beating Chapel by 2 goals to 0.

This means we are through to the County Round which will be held on Saturday 3rd February at Wainfleet Road.
Posted by David Ball at 22:13:00 No comments:

A total of 36 children represented the school in the annual cross country event at Well Cricket Club on Thursday 12th October.
George was the winner of the Y5 boys race and Macey-Jane was victorious in the Y6 girls event.