The first round of fixtures in the Y6 Hockey League took place on Thursday 17th March.
Our team of Arthur, Hannah, Grace, Charlie-Ann, Chloe, Cameron W, Sam F and Lenny played Wainfleet.
Some excellent team work helped us to a 10-0 win.
Our next game is against Skegness Junior Academy on the 24th March.
Posted by David Ball at 13:11:00 No comments: 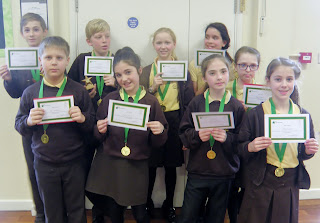 Aimee, Aron, Cloud, Kenzie, Lenny, Lilly, Molly, Sophia, and Will, took part in a netball tournament at Skegness Grammar School on the 10th March.
They were winners of the competition and Lenny was voted player of the tournament.
Posted by David Ball at 13:06:00 No comments:

Three team took part in the district volleyball tournament at Skegness Academy on Wednesday 16th March.
Richmond 3: Grace, Olivia and Ava made it to play off league 4 which they won to give them 10th place overall out of more than 20 teams.
Richmond 1: Ben P, Freddie, Keelan and Ewan won their league and made it to the final as did Richmond 2: Will, Lenny, Charlie and Alfie.
In the final play off league it was Richmond 2 who ran out as winners beating Richmond 1 into second place.
Posted by David Ball at 13:03:00 No comments:

Four Y5 pupils; Tyler S, Tyler W, Kaycee and Emily took part in a New Age Kurling Tournament at Skegness Academy on 2nd March.
They all enjoyed taking part and came second in their group.
Posted by David Ball at 22:37:00 No comments: