On Thursday 26th January a team of boys from Year 6 took part in a basketball tournament at Skegness Academy.
The team was made up by; Tyler S, Kiefer, Mateusz, William, Dennie and Oliver. 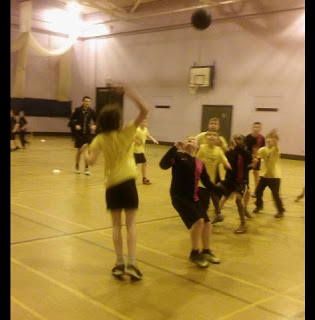 “My favourite moment was when I scored my first goal. I scored seven baskets altogether and I am really happy. It was so fun. I definitely want to play the sport again!” - Kirsten.


On the 25th January, the girls basketball team (Me, Tia A, Molly, Aimee, Lisa and Kirsten) went to a basketball tournament at the Skegness Academy. When we arrived I was very nervous but excited too.
The first game we played was against The Skegness Junior Academy team B. Unfortunately, in the first 2 minutes of the game I injured my little finger and it really hurt. After that the other team ended up beating SJA team B 12-4. I missed out on the next two games which were not very goods scores for us. Next was SJA team A, and they beat us 20-10. Watching and not taking part in the game made me really cross. Friskney then beat us 6-2, and that was the time when I was practising with one hand on my own. At the last game I joined in and we the beat them 12-4. I was very proud that I still got up and played at the end. Overall we finished 3rd which is good enough for me.
Posted by David Ball at 23:25:00 No comments:

On Wednesday 25th of January Me, Isabelle, Tia Anson, Molly, Kirsten and Aimee took part in a basketball tournament at the Skegness Academy. We started walking up the academy at 3:00pm and we arrived there at 3:30 just before the tournament started.
Our first match was against Skegness Junior Academy B. At the start of the match Isabelle unfortunately collected an injury on her hand. She missed most of the match, but was able to sit on the bench as we had an extra player. We won with an incredible victory of 12-4.
In our next match (which was against Skegness Junior Academy A) we were doing so well before our break, before so long when they took over with a 20-10 loss for the Richmond school.
Our third match was no better than the second match but we tried our best and against Friskney, we only lost by 2-6.
In our final match we were against Woodhall. Isabelle’s hand was feeling a bit better and she was able to re-join the match and even managed an amazing one handed score! We were able to win 12-4 and left for home at 05:30pm.
Posted by David Ball at 23:22:00 No comments:

Isabelle, Aimee, Tia A, Molly, Kirsten and Lisa took part in a basketball tournament at Skegness Academy on Wednesday 25th January.
In our first match we played Skegness Junior Academy B. We won this game by 12 points to 4 but unfortunately Isabelle picked up an injury early in the game and missed the next 2 and half matches.
Our second game was against Skegness Junior A. We matched them for most of the first half but in the second half they made their extra height advantage count and pulled away to win by 20 points to 10.
Game 3 was against Friskney. This was a very low scoring game with both teams working hard on the defence. Friskney ran out winners by 6 points to 2.
Game 4 was against Woodhall. We got off to a fast start and led 10 -0 at half time. In the second half Woodhall came back at us but we finished as winners by 12 points to 4. 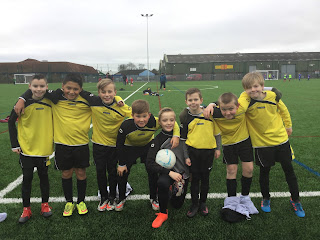 We began with a game against Market Rasen where a goal in the first 20 seconds helped to calm any nerves and set us on the way to a 3 - 0 victory.
Next up was Linchfield who had also won their opening game. This was a much closer game and we had to be at our best to run out 1 - 0 winners.
Going into our third game, against Saxilby, we knew that a draw would be enough to see us into the semi-finals but a defeat would see us miss out on goal difference. Once again we played very well and won by 2 goals to nil, securing top spot in our group in the process. 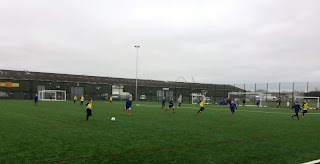 In our semi-final we played Parish Church who had finished as runners up in their group. We started strongly and were 3 goals up by half time. This allowed us to try and save a little energy for the final and although Parish Church came back strongly we restricted them to a single long range goal.
In the final, we played Malcolm Sargent Primary who had also won their group. We went behind for the first time in the competition early on in the first half. However, we looked to be getting back into the match and created a few opportunities of our own before a goal in the dying seconds of the first half put us 2 goals down. In the second half we couldn't break through a strong defence and had to settle for second place.
Throughout the tournament the whole team displayed a high level of sportsmanship, determination and skill and should be proud of their efforts.