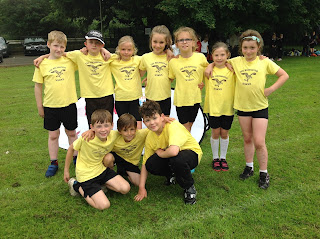 A team of 10 Y4 pupils (Ella, Luke, Samuel, Grace, Tegan, Lily-Mai, Ben, Alexander, Kuba & Lexi) finally got to take part in the local round of the Tri Golf tournament on Wednesday 22nd June. After several washouts the team went to Skegness Academy and ran out as winners - progressing to the area finals at Alford the next day.
In the area finals we came third.
Well done to all those who took part, and thaks to those who helped with transporting children.

We had a very successful day at the Friskney 6 a side football tournament on Saturday 25th June.

The girls team, which was mostly made up of Year 5's (Molly, Tia M, Scarlet B, Aimee, Freya, Olivia & Isabelle) plus Chloe from Y6, were hoping to gain some experience ready for next term's competitions. They were in a competition with: Seathorne, Woodhall Spa, Partney, Friskney and Skegness Junior Academy.
They began with a match against Seathorne. In spite of having the majority of possession we were unable to get a goal and a defensive mix up saw Seathorne take the win.
We got our first points in our next game as we beat Friskney.
Our third game saw us draw with Woodhall Spa, meaning we needed to win our last two games to get through to the final.
We beat Skegness Junior Academy and then after a long wait we played Partney. Partney took the lead and looked like they were going to pip us for a spot in the final but the team kept going and managed to equalise and then score a winner to secure our place in the final.

The final was against Woodhall Spa and like the earlier match it was a close game. We spent a lot of time in the Woodhall half but they defended really well and were very dangerous on the counter attack. At the end of normal time it was still 0 - 0 so the match went into extra time with the first goal being a 'golden goal' winner.
We scored to regain the trophy for the 3rd year in a row.

In the boys competition we had 2 teams a Y5 team - again looking for experience ahead of next year's competitions and a Y6 team. In the boys' competition there were 9 teams: Alford, Richmond A, Richmond b, Seathorne, Skegness Junior, Wainfleet, Hawthorn Tree, Woodhall Spa A & Woodhall Spa B. Each team had to play each other once and then the top 4 teams were to go through to the semi-finals.

The Y5 team (Richmond B - Dalton, Mckye, Ethan M, Billy, Frankie and Evan) began with a confidence boosting 5 - 0 win over Woodhall B and went on to play very well all afternoon winning another 5 matches and losing just 2 - a narrow 3-2 loss to Seathorne and a 2-1 loss to Richmond A.

The Y6 team (Richmond A - Ben P, Keelan, Ewan, Louis, Ethan, Alfie and Freddie) went all through the league section with a 100% record with probably their toughest match coming against the Y5's.
The Y6 team came top of the league and the Y5's were just pipped for second by Seathorne on goal difference. This meant Seathorne (2nd) played Hawthorn Tree (4th) and Richmond A (1st) played Richmond B (3rd) in the semi finals.
The Y6 v Y5 game was goalless at the end of normal time and looked to be heading to a penalty shoot out until Alfie knocked in the winner from close range.
In the final Richmond A's opponents were Seathorne. The Richmond defenders stood up well to some very physical play and limited Seathorne to very few chances, whilst our attacking play led to more chances being created at the other end. In the end it took just one goal for Richmond to win back the trophy.

A team of Y6 (Lenny, Arthur, Lily, Sam F, Keelan, Ewan & Alfie) and one Y5 pupil (Harry) recently took part in a cricket tournament at Skegness Cricket Club. Disappointingly, several teams dropped out at the last minute meaning we only got to play 2 games.
We began with a victory over Mablethorpe but then lost to a very strong Woodhall Spa team.